One of the major perks of living in Melbourne, and Australia in general, is access to some of the most beautiful wineries. It’s not often in England that you can just hop on a bus with friends and disappear into a world of acres of vineyards. This can be dangerous though when you have drastically cut back on the amount you drink week by week (more on that later).

To start with you have to fill up the bus with good people. Now I’ve done ok with that moving here, I started with a job I didn’t love but the company was filled with the best people. I’m lucky enough that nearly two years after leaving that I’m still included in some of the fun stuff they get up to. But you know things could get messy when the very first stop on this tour of the beautiful Yarra Valley is a Gin distillery!

We started at The Four Pillars distillery at 10.30 in the morning, now I normally believe in at least letting the sun pass the yard arm before drinking. (Unless it’s mimosas on holiday or at Christmas). So doing 5 mini shots of an alcohol you don’t normally drink that early was, in hindsight, a bit of a mistake. But in for a penny!  They are knowledgeable and passionate about their Gin at Four Pillars, and I will admit their Shiraz Gin is actually pretty delicious. 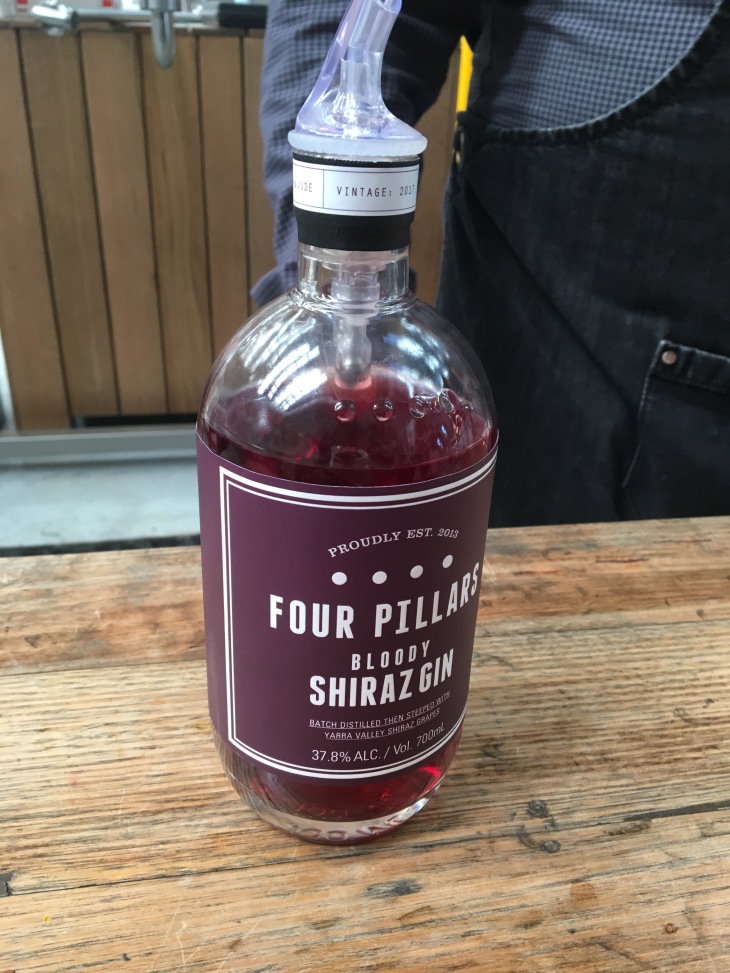 But I still don’t think it will sway me from my usual. Although the fantastic Tom Collins they made me to drink, whilst sitting outside on the first hot and sunny day Melbourne had given us this year, was very appealing.

Problem was I was then already drunk, with three wineries to go. Now I’m normally pretty good at knowing when I’ve had enough and cutting myself off. But every now and again that switch just doesn’t work. These are the times that I’m ready to give up drinking entirely, but then I get over it.

Off to lunch next at Rochford Wines. We started with a quick tasting. Unfortunately the man doing the tasting at this cellar door was a bit of a, what’s the word, knob! I’m pretty happy to laugh at myself, but when a stranger decides your name is Cheryl because you are wearing leopard print he clearly does not understand the fact that leopard is now basically a neutral. Or the beauty of my Ganni skirt!! He also told us a story about how a gypsy had given him the ring he wore in return for a bracelet? See, total knob!
The lunch was delicious, but possibly too little too late. A beautiful barramundi, but really needed so many more carbs.

On to the very pretty Dominique Portet, it’s at this point where you start feeling very sorry for the people running the tastings. We were very clearly not getting the fine nuances between the different grape varieties, and what the climate was like that year.
The last winery was the one I was most excited to visit, really wished it had been the first stop of the day!! Domain Chandon, this place is beautiful and I will definitely go back when I can do it justice.
So that’s it absolutely nothing else happened that day. Full stop.

Ok, maybe we hung out in the beautiful grounds of Chandon. Drinking sparkling red, I never drink red wine?! Then got back on the bus for the long drive back to the city. Now I should point out that I get motion sick at the best of times, these were not the best of times. I don’t think I need to expand on this, but I basically left most of my dignity in the Yarra Valley and the rest of it behind Fed Square.

Thanks to my lovely friends who sorted me out and got me in a taxi home. Well at least I took home the prize for best on ground this year. That’s something.